A Missing Link From Most Strength Programs 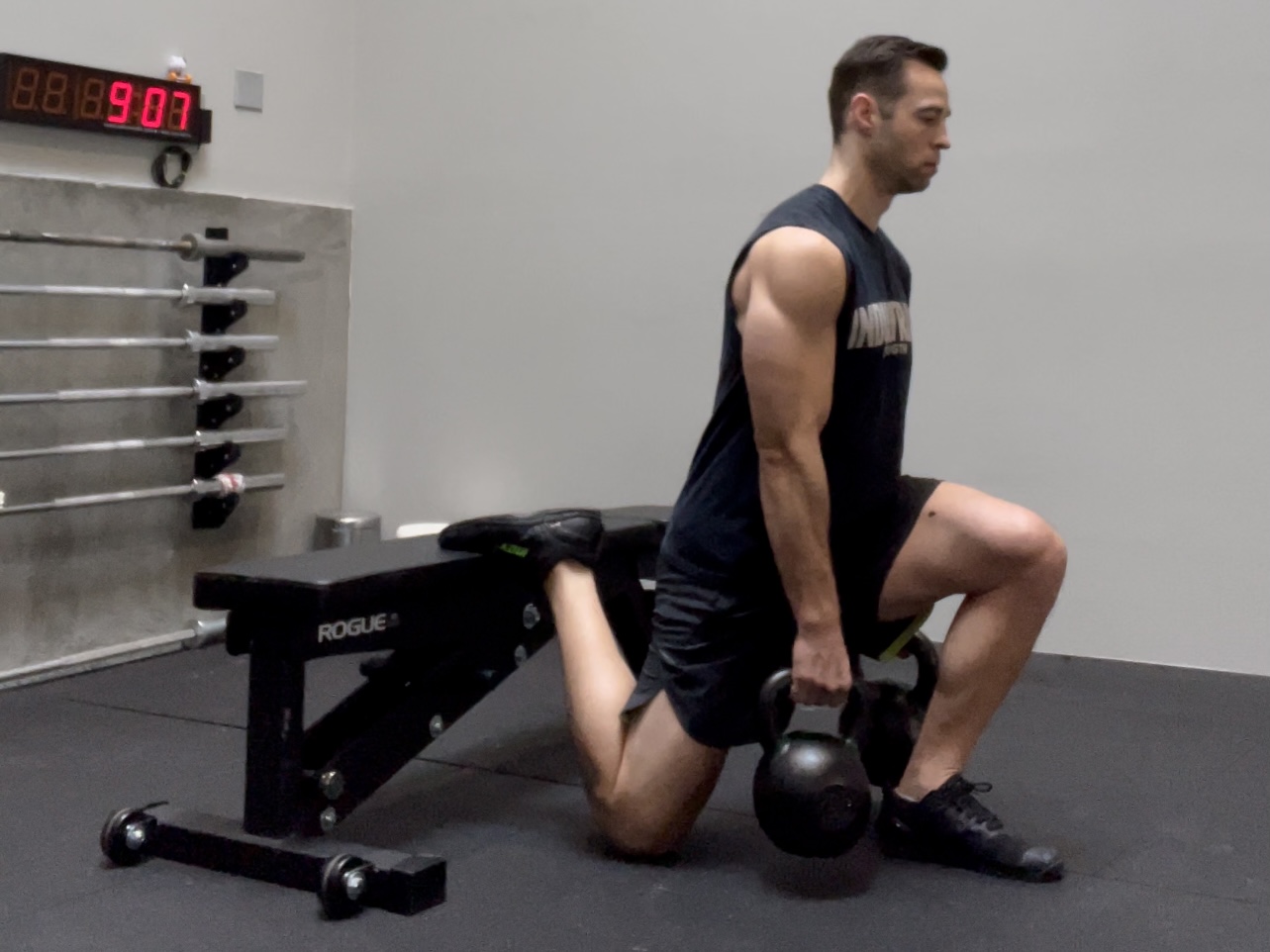 There are tons of great exercises out there, and if you ask a group of strength coaches or personal trainers what some of “the best” strength training exercises are you’ll probably get a lot of similar answers.  If the group you’re asking tends to favor barbell lifts they might respond with squats, bench press, deadlift, and military press.  If they favor kettlebells then they might answer swings, Turkish get ups, snatches, and so on.  One type of exercise that I think is often overlooked, is hugely under-valued, and just about everybody could benefit from doing more of is a category that is broadly called “lunges” … I know you just cringed when you ready that 

The category of “lunges” actually encompasses a range of exercises.  One of the ways to organize it is to sub-divide it into three categories:

1) Split squats (asymmetrical stance, both feet stay in contact with the ground at all times)

3) True single leg (for the entire set you only have one foot on the ground and the other leg is airborne … if you know what a “pistol squat” is that would be a good example).

As a coach there are many reasons that I love these exercises, and that you should consider doing more of them in your workouts.  For starters, I want the people I work with to have as many degrees of freedom as possible when it comes to their movement repertoire and what positions they are strong in.  In order to do that, it is imperative to do at least sometraining in stances and postures other than the most common one: 2-footed symmetrical.

Secondly, split squats and lunges are often more accessible to people than regular squats, meaning most people can perform the former with better technique than they can the latter.  Don’t get me wrong, I’m certainly not hating on squats – in fact I love them and for a long time they have been one of my favorite exercises (most recently Zercher squats specifically).  However, after having coached full-time for close to 15 years now, I can tell you that there is a significant portion of the general population for which traditional squats are simply not accessible … at least not with the quality of technique that I want to see as an instructor.  This lack of accessibility can come from a combination of factors, some of which can potentially be improved to a degree with practice (such as flexibility) but others cannot be changed, such as body proportions and bone structure.  For example, someone with long legs and a short torso will have a harder time getting into a good squat compared to people with the opposite proportions.  Another example is the way the actual hip socket is shaped – some people have hips that are shaped well for squatting, while other people have bone structure that makes it quite difficult.  Unfortunately there isn’t really anything that can be done about bone lengths and shapes, so you are kind of stuck with what you have (you can thank your parents … or blame them).  That said, split squats and lunges are usually still quite accessible even for the groups described above for whom traditional squatting is difficult.

Thirdly, because lunges inherently challenge one leg more than the other, they do not require as much external load to challenge the leg and hip muscles (in comparison to classic squats and deadlifts).  This is a good thing because it can let you get a great workout for your legs and gluts while not asking as much from your back.  If you are able to design your training to find a nice balance between traditional squats and deadlifts mixed with a dose of lunges you’ll have yourself a winning combination that will develop some serious strength, build muscle in all the right places, AND not overly tax your lower back.

Fourthly, lunges are able to challenge certain aspects of joint stability better than traditional squats and deadlifts.  One of the most important aspects of a healthy joint is its ability to rotate, and for you to be able to control that rotation.  If you are unfamiliar with that term, imagine a ratcheting screwdriver – it needs to be able to rotate freely and smoothly both clockwise and counterclockwise while maintaining solid contact with the screw.  The tool would not work well if it only turned one direction, or if turning one direction caused the tool to slip and lose contact with the screw.  Your joints work in a similar way, where they need to be able to rotate both “externally” and “internally” while maintaining flush, solid contact.  Because the stance for lunges is inherently asymmetrical, when performed well they will develop more control over internal and external rotation of your joints (especially your hips) compared to exercises in a symmetrical stance.

Lastly, the strength you develop when working out is fairly specific to the positions you train in.  Your muscles will only get stronger within the specific angles you train, and just a bit outside of that (call it 10-15 degrees).  Most people cannot squat low enough with good form to actually train their hip and knee joints through a full range of motion, so they are leaving a lot on the table.  Lunges are well suited for “deficit” training, which is specifically designed to increase range of motion beyond what you would normally do.  As long as you are prepared for it (you have healthy joints and a sufficient baseline level of strength) this is a valuable thing, as it allows you to strengthen your hips and knees more completely.  As a mental exercise, first visualize a normal lunge where you step backwards, tap your knee to the ground, then return to the start; visualize your joint positions at the stage your knee is tapping the floor.  Next, imagine you are standing on a stair, and you do the same step-back lunge motion and touch your knee to the floor below the stair.  In this example, your front knee will be bent quite a bit more, and it will be much closer to your chest which means your hip is also bent more, and you’ll be strengthening the associated muscles through a greater range of motion.  Watch out though – these will make you really sore!

To wrap up, I strongly encourage everyone to include some version of lunges into their training on a regular basis (with the obvious caveat that you don’t have any health issues which make that unadvisable).  If you are not doing any of them in your training now, try starting with doing them just 1x per week; 10L+10R / 2-3 sets.  If you already are doing them, consider trying some of the deficit variations I described above – you’ll be amazed how much more you feel them the next day!