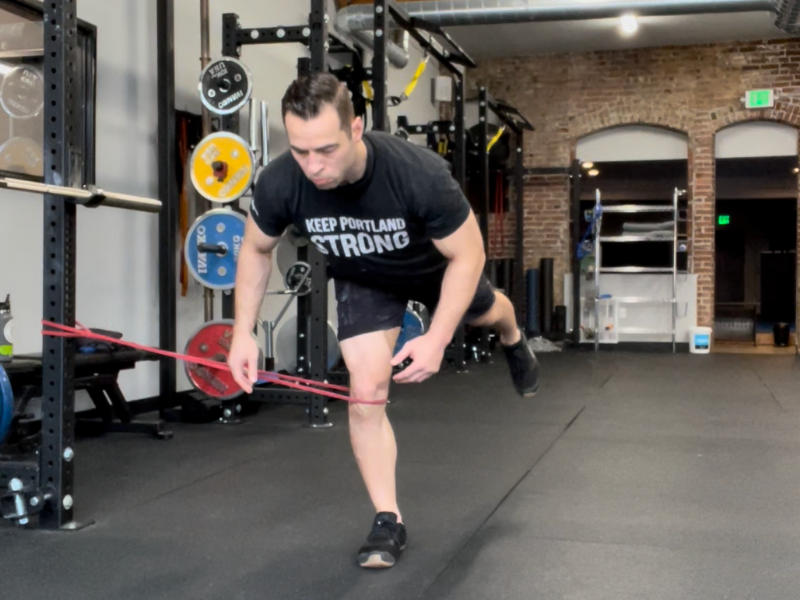 Recently I shared a reel on Instagram of me doing a variation of a single leg deadlift – it got quite a few views, and so I thought I’d do a little longer explanation of it.  If you didn’t catch it on Instagram, here is the video:

To start I will provide some context. In the caption (the written portion that can be part of an Instagram post or reel) I used the example of building a race car (NASCAR, Indy, Formula 1, you can pick).  In any case, everyone knows that to build a fast race car you need a big engine with lots of horsepower.  I hope that everyone can also agree that the more horsepower your engine has, the more you also need to beef up your brakes, tuning, suspension, and of course you have less margin for error in your alignment.  If you were to add significant horsepower without also making improvements in those areas you’d be asking for trouble.  Of course, when it comes to performance vehicles you hear plenty of bragging about how much horsepower a vehicle has, yet you never hear much about the brakes or those other systems.  At the same time, it is obvious that those systems are important too, and any competent team would make sure to make improvements in those areas as well.

In strength training we face the same situation.  People love bench pressing, deadlifting, squatting, and generally lifting heavy.  They talk with their friends about how much they lift on those “horsepower” exercises, and possibly even enter competitions for them.  That, for sure, is one of the more “fun” parts of strength training.  However, similar to the race car analogy, the more muscle you build (horsepower) the more attention you need to pay at developing your other systems as well.  This could be accomplished with techniques and methods such as stretching, soft tissue work, motor control drills, being attentive to posture, and so on.  Basically, you should be trying to strengthen any weak link in the chain.

Circling back to the short video, it is a great drill to address two important qualities: alignment and stability.  Alignment is more or less putting your joints into the optimal position at a specific moment in time to perform the task at hand.  Stability can be thought of as keeping the joints in said alignment as you move through the motion or impose some other challenge on the alignment.  Alignment is like a still frame photo, and the stability is like a series of still frame photos that when compiled create a motion picture.  Alignment is a precursor to stability, with stability being the ability to maintain a desired alignment (or at least not deviate too far from it) when doing an activity (gym exercise, sports movement, or just walking around).

In many gym exercises and athletic movements you want your joints to be “stacked.”  This creates a situation where your joints will be the safest and you will be able to perform at your best.  In the example shown in the video:

These same criteria would apply to almost all lower-body exercises and many athletic movements.

That said, we all know that understanding what is optimal and BEING ABLE TO DO IT are two different things.  For many people the ability to maintain those criteria is incredibly hard; even when they are really focused on doing it, their body just does not have the ability to do so.  We often call this a “compensation” – you are trying to do one thing, but your body has a mind of its own and just does something else instead 🙂

One of the most common compensations we see is the knee not tracking the foot – not only on this specific exercise, but on many gym exercises and athletic movements such as squats, lunges, kettlebell swings, and running & jumping.  When the knee falls outside the pinky toe it is called “varus” and when it falls inside the big toe it is called “valgus.”  In most circumstances neither of these are desirable because either one both decreases your mechanical advantage and increases the likelihood that you will overload tissues and become injured.  Valgus is more common, however, for me specifically I actually am challenged more with varus.  This is of particular significance for me these days because the ligament I injured six months ago is on the outside of the knee (the LCL) and is stressed when the knee goes into varus – so it behooves me to make sure I have good alignment and do not overstress that ligament.

Now it is time to circle back to the video.  If you watched it, you were probably wondering why the red band was there. One strategy we use to help correct compensations (as described above) is to “feed the problem.”  In my case, my knee falls into varus a bit on some exercises, so I used the band to actually pull me EVEN MORE into varus.  You have to be careful here, because you only want a subtle pull; and when you get just the right amount of pull from the band something awesome happens.  Your body starts to “feel” itself being pulled out of position, and automatically corrects itself to find a better alignment.  Without the band, my knee often starts to drift laterally beyond my pinky toe, and often the inside of my foot (the ball of my foot) will lift off the ground.  When I attach the band and get the right amount of resistance from it, my form improves and my knee tracks over my toes much better.  The goal is to gradually rely on less and less resistance from the band, and eventually to not need it at all, and just have my body find ideal alignment on its own, and to maintain that alignment as its “default” as I perform this and other exercises (aka “stability”).

This method is called RNT or reactive neuromuscular training.  It is adaptable to many situations, and is a great tool to help make improvements in compensations.  Typically all you need are some inexpensive bands, a sturdy object to attach them to, and a strong understanding of what corrections you are looking to make.  If you have known compensations that you are dealing with, or for one reason or another you know that you are challenged to maintain alignment and stability during certain tasks, try doing some RNT work for it – it might be just the tool you need to get everything moving in the right direction.