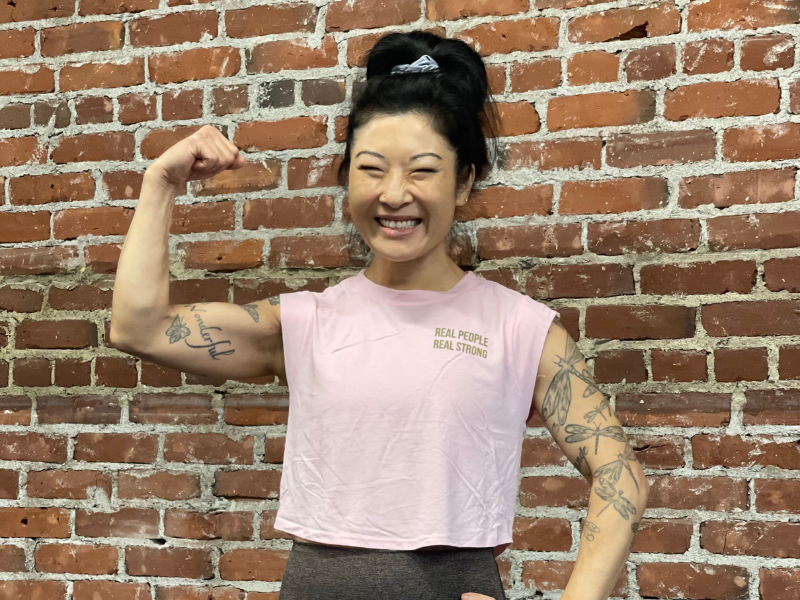 ONE: In most cases, grip the object you are lifting as tightly as possible.  Not only does this give you a more secure grip on it, it also helps you recruit other muscle groups too, such as your rotator cuff in your shoulder and even muscles in your core.

TWO: Understand if your spine should be moving during the exercise or not.  In most cases, it should NOT, especially if you are lifting heavy weights.  Common exercises like squats, deadlifts, and kettlebell swings should not have any movement from the spine, however a frequent mistake is to allow movement to occur there.  If you notice this happening make sure to correct it right away.

THREE: Take note of what speed you want the exercise performed at, and make sure that what is actually happening does not deviate too far from what your goal is.  For example, if your kettlebell swings are supposed to be fast and explosive and you notice them start to slow down, then make an adjustment.  On the other hand, if your biceps curls are supposed to be slow and controlled and you start to go faster and use excessive momentum then make adjustments there too.

FOUR: Movements are more important than “exercises.”  For example, a squat is a movement before it is an exercise.  I would much rather see someone use a kettlebell for goblet squats and do the movement with good form and full range of motion compared to someone trying to do back squats with a barbell and struggle with their form and not be able to hit proper depth.

FIVE: Speaking of movements, it is a good idea to train many different types of movements in your workouts.  You don’t need to include every type of movement in every single workout, but over the period of a week or month you should strive to include a wide variety.  Some examples of movements to include are: squat, hinge, lunge, press, pull, carry, and twisting.

SEVEN: If you want to build muscle and get stronger you need to train lower body movements.  Even if you only care about “aesthetics” and having a muscular upper body (you know who you are) then you still should train your hips and legs.  Compound lower body movements like squats and deadlifts are known to increase the anabolic hormones that help you build muscle AND burn fat, whereas upper body movements like bench press do not do that to nearly the same degree.  Free weight exercises tend to do much better here, again because they recruit more muscle groups, so don’t rely on leg presses, hack squats, or especially isolation leg extensions / curls to get the job done.

EIGHT: Do your exercises through a complete range of motion whenever possible, and pay attention to the two end ranges (top and bottom).  This is one of the biggest culprits I see when it comes to cutting corners in the gym – the most difficult parts of exercises are usually the first few degrees of motion and the last few degrees.  Since these are the most difficult, people often “conveniently” skip these and end up doing just the mid-ranges of the movement.  If we use pull ups as an example, a lot of people leave their elbows a bit bent at the bottom, and they only go high enough to get their nose or maybe chin level with the bar instead of getting their collar bones to the bar.  Another example would be push ups – I cannot even tell you how many people never lock their elbows at the top of their push ups, let alone truly “complete” the repetition by protracting their shoulder blades at the top.  If you want the most complete strength possible, as well as the healthiest joints, train them through a full range of motion with solid control at both end ranges.

NINE: Lift heavy weights and avoid missing reps – especially on compound movements.  For most people the bulk of their training should be done with weights heavy enough that 3-10 repetitions is pretty difficult.  Most of the time you should end your sets feeling like you could do another rep (or a few more) but not a ton more.  This combination hits the sweet spot of letting you use weights that are heavy enough to stimulate your body to build muscle and help you get stronger, while also avoiding situations where your technique is likely to breakdown and risk overtraining or even injury.  This is obviously situationally dependent – there is a big difference in pushing your biceps curls to failure (typically not a big deal at all) compared to making a habit of pushing your deadlifts to failure (typically a bad idea).

TEN: Consistency is key.  I have seen tons of people make impressive progress by committing a mere 90-min / week to strength training.  That could be either 30-min 3x or 45min 2x.  Of course, more than that is great, but I think a lot of people are under the impression that it takes many hours in the gym every week to get results, and I am here to tell you that you can actually get really impressive results with a lot less time than you might think.  The key is to stay disciplined and consistent, and not miss workouts.  If you can make every Monday + Wednesday then make a sincere effort to show up EVERY Monday + Wednesday.  Progress does not always happen fast, but if you can do 2x / week for a year then you have racked up 100 workouts.  If you do that for a few years you will be amazed how far you have come.